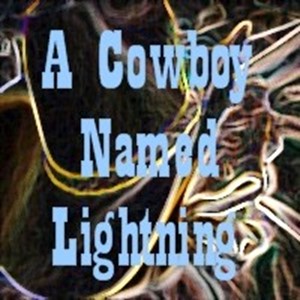 A selection from the musical play "A Cowboy Named Lightning" - story and lyrics by Dorinda Clifton and music composed and arranged by Rob Birdwell.

It's funny!  It's quirky!  Simply put, it's brilliant!  The story and lyrics are terrific and I think the music (when in the hands of musicians and voices to bring it to life) will charm and delight!

But this is just my own humble opinion -Rob Birdwell

Somehow Dorinda and I were put in contact and we began the work on this strange and interesting play with me focused exclusively on the music to Dorinda's nearly completely script.  I chipped away on this for probably 18 months.  Dorinda pretty much gave me free reign over whatever I wanted to write musically.  And I stuck to her lyrics almost to the letter.  It was her baby and I simply wanted to put music to it.

Dorinda had some really great and grand visions for this play.  She wanted to turn it into a movie (different from our musical approach) and I had no doubt that that would be possible.

I learned a great deal from her - she wrote constantly and wasn't afraid to make sweeping changes if she felt the need.  It was fun to work with her.  I enjoyed her laughter, energy, and creative spirit.  I still have a draft of her book "Woman In The Water" as well as all the floppy drives of the various drafts for this work.  Dorinda passed away in 2009 but her work lives on in movies (as an actress in Hollywood) and as an author and in many more realms I'm certain.

I've always felt this would be a fantastic musical play for a small venue with a creative director and cast.  I know Dorinda would want this work to be performed - that was the intent all along with our collaboration!

Dorinda lived a fascinating life - google her for more information on her career as a Hollywood actress, her silent film-era actor/director father Elmer Clifton, and her work as an author: