Rob Birdwell is composer, arranger, conductor, songwriter, and performer.  He attended the University of Idaho then moved to L.A. to study at the Dick Grove School of Music.  Rob is a graduate of Dick Grove's Composing & Arranging Program.

Rob is primarily a Trumpet/Flugelhorn player although over the years he's picked up other instruments either out of necessity or just plain curiosity including:  bass, piano, drums/percussion, vocals, mandolin, and tenor sax.

Some of Rob Birdwell's musical highlights (so far) include:

Rob Birdwell performs with a variety of local and regional arts including Halie Loren, The Nettles, Dave Storrs and 5th & B, Sideways Portal, The Svens, Creighton Lindsay, and many others.  He has written hundreds of songs for both vocal and instrumental settings, has several independent "solo" CDs released, and an ever-growing number of charts and arrangements.

Rob believes that the study and performance of music is a life-long journey - he's still learning! 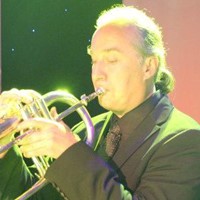 Read more about this video...

How Many Times
"How Many Times" opens the set and features Rob on vocals and all instruments. After the first verse, Rob plays a flugelhorn solo and then after another verse he switches over to take a tenor sax solo (a relatively new instrument for Rob and somehow almost rivals his flugel solo). Then we hear a bit of musical development and into a short flugelhorn/tenor sax soli. Rob wraps up the tune with the question: "How many times will we close our eyes and ears / to all reason and compassion / see only shadows and not the tears / how many times will we read that sad headline? / looks like one more time..."
Buy Now     Read More