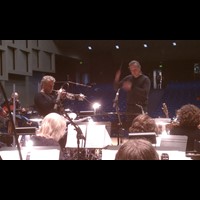 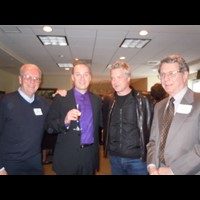 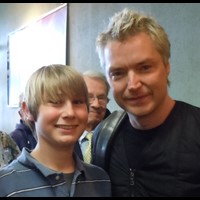 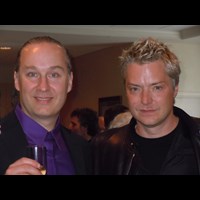 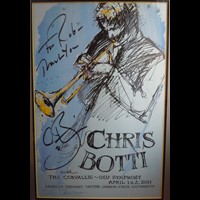 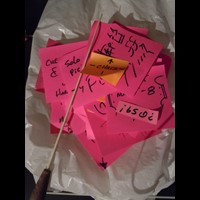 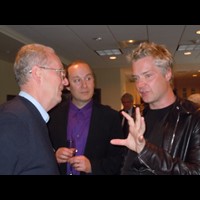 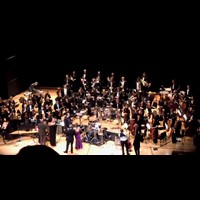 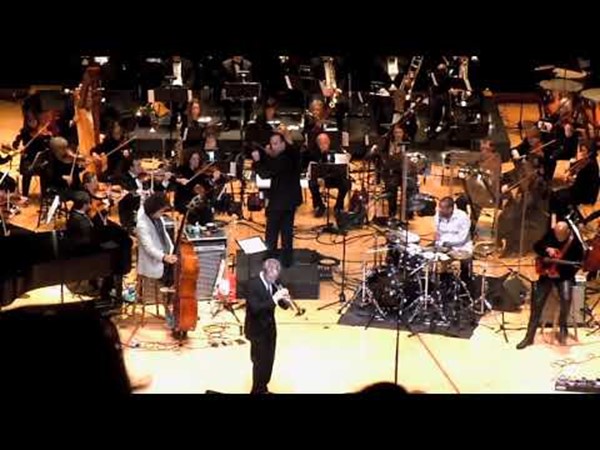 This video shows Chris Botti performing, the band, the orchestra - and me conducting!  What a time this was and what an honor.

This was a wonderful two night engagement.  Any chance to work with the wonderful Corvallis-OSU Symphony is great.  Add to this the fabulous band Chris brought and the wonderful arrangements - it was a big "wow" for me and all who saw and heard!

Some brief notes I made of the two nights of concerts in Corvallis - enjoy! -RB

On April 1 & 2 Chris Botti and his amazing band came to Corvallis, Oregon and performed with the Corvallis-OSU Symphony Orchestra.  I had the great honor of conducting for the shows and it was a blast.

Chris Botti actually grew up here in Corvallis, attending Crescent Valley High School.  Chris says he tells everyone around the world that he's from the "Jazz Capital of the World" (and then mentions Corvallis - bet that gets some big laughs too) - but you know what?  For these two nights in April I think Corvallis, Oregon really was the Jazz Capital of the World thanks to Chris Botti and the band!

I'm fortunate to get to play and work with some amazing and talented musicians (especially here in Corvallis!) - but these two nights, conducting the Chris Botti shows, were something very special for me for a number of reasons:  being a trumpet player myself made it simply awesome - what an inspiration Chris is and what a hard worker; and having such a deep appreciation for Chris' playing, musicianship and professionalism made it all the better.  And getting the chance to see my teenage friend, master guitarist and Botti bandmate, Mark Whitfield, was a real treat.

Mark and I played gigs together when we were 16 & 17 - whatever music we were playing, Mark always made it sound spectacular.  I have many fond memories of those dreamy days - but flash forward just a few years (uh, mmm) and somehow, someway, we're playing a gig together again...go figure!

Being able to be part of this event and share in it with colleagues, friends, family, students, all the musicians in the orchestra, tech crew, board members, and a variety of people in this community was simply amazing.

Ken Saul (principal trumpet in the orchestra)took this photo of our Friday (pre-show rehearsal).  Mark Whitfield playing guitar, Chris Botti, and Rob Birdwell conducting, rehearsing Flamenco Sketches!  One little story:  after Chris and I finished our score review meeting I made my way to the podium - I actually thought Chris was still backstage and that I'd have a moment to go over some notes & changes.  Many in the orchestra were still warming up.  I think I waved everyone down - said something like "Okay everyone let's get started" and things quieted down; yet someone was still playing (one of those darn trumpet players?) - then I say "Okay please stop playing" only to realize it's Chris, right behind me!

Chris Botti took the time to talk with middle school and high school students on Saturday April 2, 2011.  Pictured here:  Frey Birdwell (my son - he plays drums & guitar!) and Chris Botti.  I'd played some of Chris Botti's concert footage for my own students (Early Bird Jazz Band) during the weeks leading up to this concert.  I played Billy Kilson's drum solo from Chris' tune Indian Summer (from the Boston DVD, 2008) and the kids went WILD!  I was so excited that they were excited - anyway, my son had been exploring the drums a bit and now he's playing and practicing regularly!  I ended up buying Kilson's drum throne that we borrowed from Gracewinds (during the setup Chris' tour manager, Jeremy, said the one they had was too wobbly).  As drummer Dave Storrs says, you've got to "sit in the chair" - that's where it all starts!

The amazing poster by Earl Newman, signed by Chris Botti, was a gift to me from the Corvallis-OSU Symphony Board - thank you!  I've always loved Earl Newman's work (I have some of his prints from other Jazz festivals) - this one is extra special!

Pictured here are Marlan Carlson, Rob Birdwell, and Chris Botti.  Marlan initiated this entire event back in June 2009 by inviting me to be involved in a yet-to-be-defined "pops" concert.  I'd recently guest conducted the orchestra for my own piece, A New Day.  In that meeting with Marlan I was naturally honored to get the chance to be involved yet again with the orchestra (something I always love) and a "pops" concert (which might mean rock, show tunes, and jazz!) was exciting.  But what could it be?  So to try to give it some shape in my own mind, I suggested Chris Botti as the potential guest artist (never dreaming of the massive amount of activity that was going to stir up).  And who else could I suggest?  I'm a trumpet player from Corvallis, so not exactly a wild hair!  But I have to confess that my completely whimsical dream (and this concert was a dream come true) was to pair Chris with China Forbes of Pink Martini.  That pairing would be wonderful of course and maybe it will happen someday - maybe even in Corvallis!  But I don't think I'll ever get over the complete joy of witnessing the artistry and magnificance of vocalist Lisa Fischer.  So dreams do come true - never quite the way you think they will and never soon enough. Anyway, steps were taken to explore the possibility of Botti playing with the orchestra (and it really did seem very remote at the time) - and fortunately a number of factors and creative people came together.  Turns out that there were many fans of Chris' music and many of them had been thinking and working for the exact same thing!  Timing is everything. True serendipity! Bon chance! And a lot of hard work!

Just before the orchestra gets the order to "hit the bar!" On Friday night (the opening night) Chris had to explain a second time that, yes, we could all leave!  He then went on to play a wonderful rendition of My Funny Valentine with the great Billy Childs on piano.