Song of The Wind 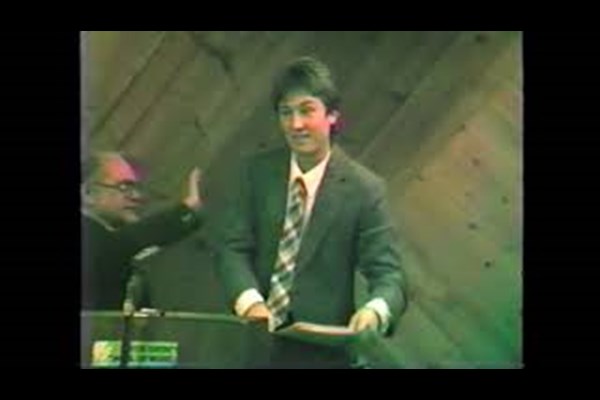 I was 21 years old, at the Dick Grove School of Music, conducting my final project. That's Dick Grove next to me (on my left, dark vest) by the podium with Jack Feierman standing by (dark jacket) to offer conducting/cuing tips.

In this video are many, many talented musicians. Each of us students had 15 minutes to read down and then get a final take of our composition.

After arranging and recording over 20 pieces (with many in-class projects/assignments/exercises) throughout the year-long CAP program, this was our chance (among others) to compose and arrange an original piece.

That's my roommate, Jeff Siri, in the hat and taking photos. He attended Grove too and is my lifelong friend today. Jeff sang on several of my CAP projects. That's Chris Bleth on the oboe who is a renowned studio musician.

Of course I admired all the trumpet players on this session but, fool that I was, never befriended any of them - we were all so busy! But what fabulous players in every section, and what a rich and practical learning environment Dick created, along with the many, many talented educators and administrators that made the Grove School of Music so wonderful. But damn, we all worked so hard!

I love how Dick is smoking (well, I'm sad it probably shortened his life) - but what I mean is that this video captures just a small moment in time of how it was. Yes, Dick smoked anywhere he damn-well wanted. It was his school after all.

That's a fellow student "Lilly" (I believe) going after me for her final. I'm sure hers was great. Everyone in our class (there were only 14 of us left at the end) did awesome and hopefully went on to great things.

My time at Grove still permeates my soul to this day. Every piece of music that I compose or arrange has a bit of Dick in it, if I can say that! ;)

Yes, we had lots of fun listening to and learning from Dick - he offered so many practical quotes and I, like many others who studied with him, say some today. In this video he offers up one of my favorites while helping to troubleshoot an issue with my trumpet part: "America will never know the difference!"

My love of music, appreciation for great playing, arranging, conducting, chord progressions, harmony, melodic writing, performing, improvisation - all were covered in such detail and conveyed with such excellence by Dick and his staff. It was simply an amazing experience.

I'm forever grateful to my parents (Bob and Christine) for supporting me, encouraging me, and paying for my school - that was no easy task. I worked as a lifeguard and swim instructor to pay my rent, food, gas, etc., but it wouldn't have been possible without their help.

I'm still active in music and hopefully even a slightly better conductor than the kid in this video but I love him (me) for working so hard. I'm proud and honored to be a Dick Grove School of Music CAP graduate.

This impossibly young and handsome guy (um, me!) didn't sleep for at least 2 days during the 10 or so I had to get this piece composed, arranged and copied. String parts were swindled at Valle Music Reproduction.  Pretty typical stuff.  We all lost at least one night's sleep a week when there was an assigned play-down.

We all wrote in pencil and copied our parts by hand with calligraphy pens. Part preparation was but one of the many courses we took.  A brave few dabbled in using their computers (early Macs probably) to print parts, but musicians complained as the fonts didn't scale and they were likely choppy on the dot-matrix printers of the day.

P.S.:  Dick Grove's teachings live on! Visit his Dick Grove School Without Walls site. I met up with Dick in 1991 or 1992, hoping to work for him in some capacity. I wanted so strongly to just be part of whatever he was doing. But at that time his school (now in Van Nuys and greatly expanded) was struggling to stay in business.  Even in that time of struggle Dick took the time to chat with me and kept a positive outlook.  Of course I only saw a small moment. Still, Dick forged on and when we chatted via email in 1997 or so he said he was happier than ever, had the CAP program on tape.  I have his keyboard course and it's great, but I've been a fairly lazy student in that department!